Since Jan 2005, there has been an exponential growth in African American writers, actors, producers and directors. Couple of years ago, the creator of Grey's Anatomy couldn't even get a break and there were NO BLACK PEOPLE ON TV.

And suddenly, Black People were the new black.

In March you can watch Black. White. On FX where two families actually trade races.

"Throughout the series, the family members submerse themselves in different environments and settings -- Brian lands a job as a bartender in a predominently-white neighborhood; Rose takes part in a Def Poetry class -- with insightful results."

What does thefayth think about this?

Well, funny enough I was actually involved in the project as an innocent bystanding poet chick, so you'll be able to see thefayth on TV telling you EXACTLY WHAT I THINK...but till then check out this insightful article by a white chick on interracial dating and the new "interracial" movie, Something New starring Saana Lathan and Simon Baker.

A girlfriend who looks like a blond goddess and is a self-described "typical, Ivy League, Upper East Side, married liberal" admitted why she initially balked at sleeping with a Nigerian fellow who worked on Wall Street several years ago. "I was afraid of discovering something really different about a black body," she said. "The hair grows differently. Skin has a big role and so does smell. I had a fear of the other. It's so clich‚d. The sex turned out to be an incredibly reassuring human experience."

Standing in the surgeon's bedroom, I was frozen with fear. It was one thing to be seen in public with him, but quite another to be naked. The darkness of his body was frighteningly exotic, so opposite my own fairness, which, by comparison, I suddenly perceived to be weak and wane. How would I touch his hair when I couldn't run my fingers through it? What if he was physically aggressive?


KUDOS TO SUPERNATURAL FOR THE INTERRACIAL LOVE SCENE OF THE WEEK! 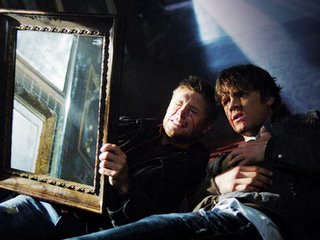 It's a better Black History Gift than just letting us pop up on screen as bangers or civil rights legacies...oh wait, Supernatural focused on an evil truck that was killing black people...close enough I guess?