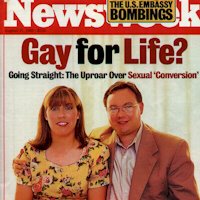 As President Bush and the U.S. Senate prepare to debate same-sex marriage this week, a new organization will launch to combat so-called ex-gay ministries and organizations. Founded by former Sirius OutQ radio host and activist Wayne Besen, Truth Wins Out will confront what Besen calls the "dangerous lie that has buttressed antigay campaigns from coast to coast...that sexual orientation is something that can be directed or 'cured.' - Advocate

GO WAYNE! Same excellent awesome activist who released the news that the most famous ex-gay (pictured above) was still...gay.
Ex-Gay Leader Confronted in Gay Bar
by Joel Lawson
Southern Voice, Thursday, 21 September 2000
A prominent ex-gay leader once featured as "going straight" on the cover of Newsweek magazine was confronted and photographed by activists Tuesday night patronizing a gay bar in Washington, D.C.