Scientology is the Devil

[...]Because of the continued refusal to cooperate, Lyn [Froyland]
was rapidly assigned to the RPF's RPF. This was several steps down
from the RPF, in the boiler room under the Ft. Harrison hotel
building. It was a dark, filthy, smelly place where the huge
boilers roared and clanked day and night and where the rats lived.
Lyn was chained to a pipe down there for weeks, under guard.
-- Hana (Eltringham) Whitfield, 4/4/94, (Declaration in Church
of Scientology v. Fishman & Geertz, No. CV 91-6426, US Central
California District Court)

So they're gonna kill this guy, right? 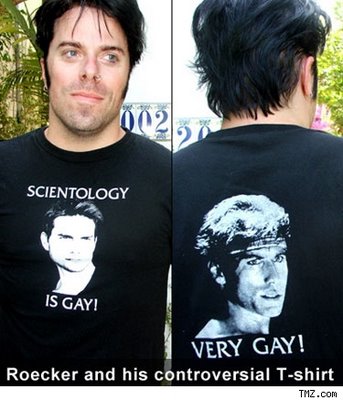 Read all about it at TMZ.com
According to Roecker, whose encounter was first reported on LA's KROQ-FM's Kevin and Bean Show, the invective started to fly after he made several references to Scientology theology and its reported central tenent, the story of Xenu.

Roecker says Jenna repeatedly said "What crimes have you committed?" and began screaming at Roecker, "Have you raped a baby?" as motorists on Los Feliz Boulevard drove by in snarled traffic.

Roecker says it appears that Bodhi Elfman prepared to take a swing at him, but thought against it.

Bizarrely, Roecker also says that the Elfmans had a young, twenty-something male companion with them whom they continually instructed to move away and cover his ears whenever references to Xenu were made.

Check out this site,

I'd always heard Scientologists actively went after anyone who was against them, but this website takes the cake.

"Other faiths also have been the targets of anti-religious violence. Extremists in the United States have fire-bombed Baptist churches and have defaced Jewish synagogues. "

The first person on the list helps run Clambake, "Undressing Scientologists since 1996" (http://www.xenu.net/)

So not a South Park fan, but their history of Xenu is funny.

"Scientology and all the other cults are one-dimensional, and we live in a three-dimensional world. Cults are as dangerous as drugs. They commit the highest crime: the rape of the soul." L. Ron Hubbard Jr.