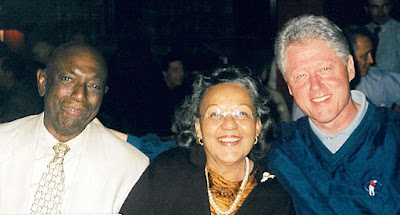 Hey NY Times, I just wanted to tell you Black People Love Clintons! That's my grandfather, may he rest in peace, with my grandmother and Bill Clinton. He came over and sat at our table for close to half an hour, just chatting about life, history and his wife. Jan, 2001: my grandfather's 75th birthday at Kincaid's in Redondo Beach, CA. He told me about visiting Hillary at UCLA, where I was currently enrolled, asked about Westwood and traded jazz favorites with my gramps. Till the day he died, it remained one of the best nights of my grandfather's life.

My grandmother, Clara (above) supported Clinton all the way to the California primary, till the desire to contribute to her generation's dream overrode her natural inclination to pick the most experienced candidate. It's my dream too, for blacks, for womens and for varying orientations, religions and cultures. But with both candidates being similar on so many issues, Obama's missteps with gays coupled with his mantle of "deserving the candidacy" in a most distasteful way. It reminds me of the last days of the Gore campaign in Philadelphia and Pennsylvania. Volunteer coordinating in the LGBT rich districts, I worked the streets and all it was then? I vote my heart, Nader is better on the environment, education, for people, for queers' And I'd argue back, hasn't a shot in hell to win dude. And sure enough, Gore could have used even the smallest percentage of those votes to become the most environmentally friendly leader of the free world. His policies would have been based in free market reality while introducing solutions only revealed with experience in the long struggle. The president of America is a "decider" for good or ill, I don't want an inexperienced candidate advised by the best. Not in this time, and not in this particular war.

To play the race card aka Black Voters are irrevocably broken with Clinton? Well that's fine, if I can call back BULLSHIT! I love the Clintons and believe the both of them contributed their lives to making our world better, and each made lasting contributions to racial equality in this country. Obama wouldn't be the candidate he is today without Bill Clinton's term. There are some Blacks, myself included, who love both Obama and Clinton. I dont understand why he's run on his own road at the expense of the many unmended rifts. A very young thing to do, dontcha think? (ducks).

Michael Dawson, a political science professor at the University of Chicago, posited last week at TheRoot.com that if Mr. Obama is not the nominee: “The Democratic Party will face the Herculean task of trying to mobilize its most loyal constituency — black voters — in the face of deep and widespread black bitterness and active campaigns in the black community encouraging black voters to defect or abstain. You can already hear the angry comparisons. Just like in 2000, the protests will go, an election will have been ‘stolen.’ ” - Rifts Mend, Unless Identity Politics is a Different Stripe