By Unknown June 26, 2015
This year saw the fewest bisexual advocates in attendance at the White House LGBT Pride Reception since 2010. Only two invites were provided to bi community advocates who work on behalf of bisexual communities. In fact, more bisexuals have died by suicide in the last 3 months, than the number of bisexuals invited to represent us at the White House LGBT Pride Reception this year.

From what I can see from my personal Facebook feed, there WERE a huge amount of transgender advocates in attendance at the event, including members of SPARTA, a transgender military organization. So I don't think it's accurate to claim that the LGBT community was pushing back on trans people by booing Jennicet Gutiérrez when she stood up to demand President Obama address the subject of transgender women detained alongside cisgender men.

Yet, questions still remain. Would Ms. Gutiérrez have been booed if she were Black? If she were cisgender, instead of transgender? If she had a sign clearly listing her demand for #Not1More? Is it time to put down your protest sign if you've been invited to the White House for a social engagement?

Recently I was at a movie theater and I was asked to be wanded by security twice. I told security I had already been wanded but they did not believe me and my friend. Instead they let the white part of our group enter and took us folks of color aside for further security inspection. At a movie theater.

I'm not one to take such treatment in silence, so as I walked over to be wanded I called out, "It's fine! I'm gonna go over here and keep being Black OK?" Personally I thought I was being funny in light of the situation but a white woman came out of line and yelled at me in disagreement! She said "stop making it always about race" and "you need to stop bringing that up". Since I'd never met this white woman before I will assume she was referring to #blacklivesmatter and all demands for Black equality.

That's what it's often like for people of color when they speak up against basic injustices. I've been wanded, searched, and frisked while walking while Black. I have been pulled over countless times while driving while Black. I regularly experience racism and when I can, I SPEAK UP! 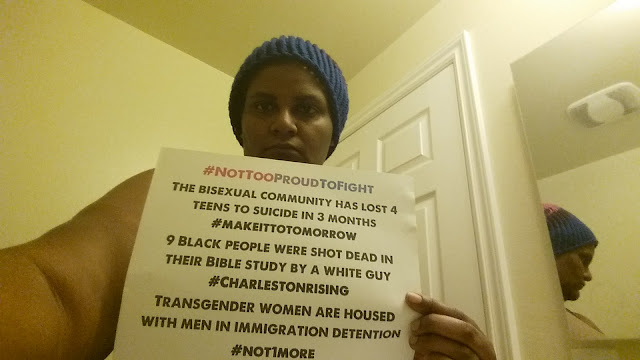 If I will not stay silent in the face of my life being considered irrelevant, how can I possibly expect SILENCE from a transgender Latina woman currently subject to being detained with cisgender men who will assault her? If folks wanna enjoy the appetizers and drinks at White House receptions, they need to help end the dangerous circumstances for transgender women in immigration detention.

I've been witnessing the push back directed at trans people of color, many of them my friends, allies and fellow bi+ community members. They are fighting for their lives to be reflected in a transgender revolution that does not speak of their issues. Imagine what it must be like for LGBT people subject to detainment, to enter the White House alongside so many like myself who are not subject to that detainment. The 6 white, cis, gay men above are the LGBT ambassadors for the US. Is that what your equality looks like?

As a member of the bisexual community, which has long been shit upon, I can well imagine the feelings of alienation, exclusion and loneliness that come with fighting from within your own community to be recognized. That feeling is far too familiar for LGBT people of color in their own movement. We are too often tokenized, utilized and USED UP by a white LGBT establishment that drowns out our grievances in favor of celebrating "wins".

So while you celebrate marriage equality today, keep in mind the fight still has a long way to go.