These Women Together: Or, Why I Sat My Black Femme Ass Out Of The "Women's March" 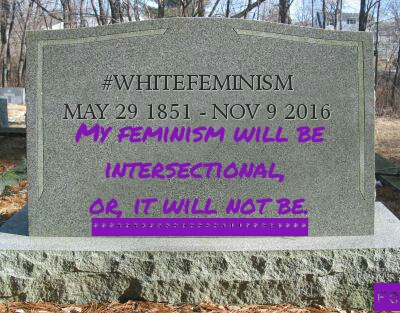 Photo Caption: Tombstone that reads #WhiteFeminism May 29th 1851 - Nov 9th 2016 and underneath it says in purple scrawl “my feminism will be intersectional, or, it will not be.”
Photo Credit: Faith Cheltenham
While I understand the intentionality surrounding the #womensmarch, I haven't willingly walked alongside #whitefeminism since that one time I kept writing for UCLA's Outwrite after my student editor went to press (against my objections) with a cover of a white woman in plantation garb next to a smiling Black woman both gazing with joy on a "mirror of history" touting the success of "lesbian rights". Ouch.Nearly two decades later, a wiser and more woke Faith has questions. For instance: if millions of women marched today, were they engaged in explicitly anti-racist, anti-white supremacy conversations while they passed out handouts from Showing Up for Racial Justice?

Solidarity looks like people who may lose benefit, status or privilege, still making a conscious choice to protest their own access to that same privilege (peace tip: follow Dr. Larycia Hawkins on Twitter to learn about "embodied solidarity".) 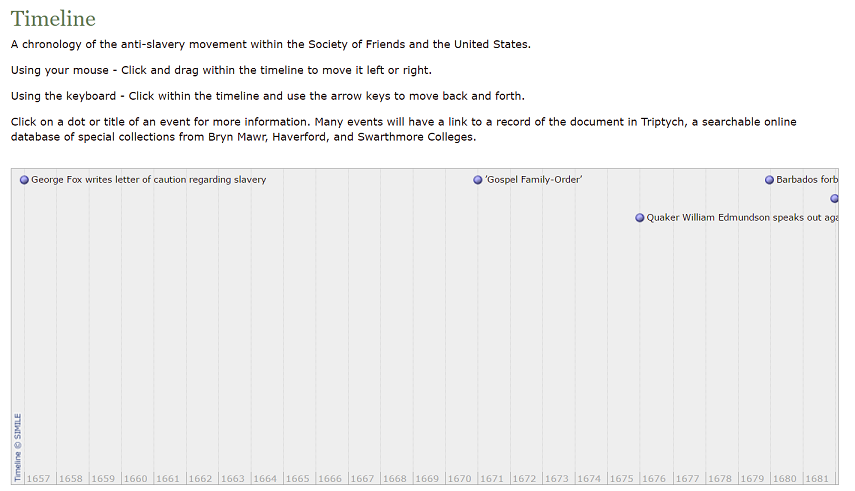 Photo Caption/Credit: Timeline of anti-slavery movement within the Society of Friends, Bryn Mawr

To me solidarity looks like Quaker icon George Fox calling for abolishment of both Black and Native slavery in 1657, and it looks like Black Panther co-founder Huey Newton support for gay and women's liberation in 1970. Both had something to lose by standing up, and did so anyways. Are women’s marches today in that same vein of solidarity?
Many articles abound stating the women's marches have dealt well with questions surrounding inclusion, but you know me! I write about queer white tears, so I'll brew tea and ask questions now.

Are #womenmarches "just another white thing?” Like safety pins, or pumpkin spice lattes? Will these marchers still be marching when Trump's new administration begins longtime detainment of anti-police or anti-Trump activists, promotes gay normality at the cost of bisexual lives, or cozies up closer to oil with quiet support from progressive leaders who fall for "making the best of it" logic? Will these marchers allow for "gay marriage" to be traded for Black and Brown lives?

Or, could these women who marched today continue to march further in the new year? Will they bring their protest signs home and stay ready to go when the next Black life is lost, when Brown people are detained or deported, the next time we lose a bisexual kid a week to their own hand, or when Native people next die for their land? Will we ever see these women marching again? For nations, or for people and lives that aren't them?

As a Black woman, resistance is a minute by minute meditation that delivers me my continued existence. I've been marching so long that my feet have a hard time remembering any other way to walk. I've been standing on street corners fighting for my rights, your rights, and everyone who needs rights, for as long as I can remember. Tired now, your turn!

To all my Black women who braved it today, you have my utmost respect and continued awe. I hope your signs were as on point as Get Equal co-director Angela Peoples’ was today (captured below by equality photographer bychubbz.)

I think this photo is going viral.. can y'all credit me and @MsPeoples if you get a chance!? #bychubbz #WomensMarch #WomensMarchOnWashington pic.twitter.com/tTa901RCnd
— W.E.B. Da Boss (@afroCHuBBZ) January 21, 2017


And to all my Black women at home today, I see us and love us for OUR STRENGTH, OUR SPIRIT AND OUR WILLINGNESS TO KEEP LOVING. Most of us will happily celebrate any women, for any reason, at any time, forever and ever amen; even though we rarely find Black women or our work celebrated in a similar way. Or did my Wikipedia page spring into existence yet?
I know I've done enough, and I certainly know thousands of Black women still unrecognized for their hard work, thought leadership, and bravery who don't have a Wikipedia page, monuments, Vanguard awards, or even close to the same salary as their white female counterparts working the same jobs.

We grind away ever awash in seas of rising misogynoir, the term queer Black feminist Dr. Moya Bailey coined for the discrimination, prejudice and unchecked fear of black women. Black girls be feared, then suffer the indignity of experiencing those that fear them also trying to bounce to Beyoncè with them too, as if we didn't notice. As if, bitches, as if!

Image Caption: Beyoncè in Lemonade singing "you know I give you life!" in an animated gif. Image Credit: Imagr.

#whitefeminism, or the myopic fight for "white women only" gender equality, didn't start in 1851 but I love to point out Sojourner Truth spoke her famous speech on equality to a room full of white women recently interrupted by #mansplaining white men.

Like every Black woman who's ever lived, Sojourner Truth pulled double duty that day. In less than 400 words, she pushed back on both the white male Christian pastors who had just interrupted a women's convention, and the white women in the audience hoping she'd decline to mention slavery in her rousing defense of women's equality (she didn't). 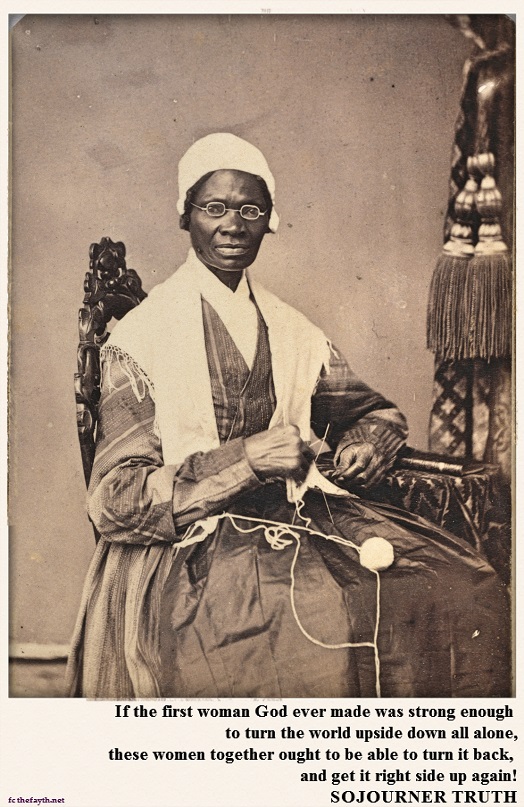 Photo Caption: Image of Sojourner Truth from Google Art Project on Wikipedia, with her "these women together" quote. Did you know? Sojourner Truth freed herself after being born 2 years after NY "Gradual Emancipation" deadline that would have legally freed her.
Image Credit: Faith Cheltenham/thefayth.net

The Soujourner Truth memorial website says cheers began to rise at that conference in Akron, Ohio, as Sojourner Truth spoke a message that would embolden centuries of women and femmes. As part of my undying thanks to Sojourner Truth, I reprint her speech in full and advise you to hear her Dutch accented voice speaking to you today, as clearly as she did then.

“Ain’t I a Woman?” as recounted by Frances Gage

Well, children, where there is so much racket there must be something out of kilter. I think that ‘twixt the negroes of the South and the women at the North, all talking about rights, the white men will be in a fix pretty soon. But what’s all this here talking about?

Then they talk about this thing in the head; what’s this they call it? [member of audience whispers, “intellect”] That’s it, honey. What’s that got to do with women’s rights or negroes’ rights? If my cup won’t hold but a pint, and yours holds a quart, wouldn’t you be mean not to let me have my little half measure full?

If the first woman God ever made was strong enough to turn the world upside down all alone, these women together ought to be able to turn it back, and get it right side up again! And now they is asking to do it, the men better let them.

Obliged to you for hearing me, and now old Sojourner ain’t got nothing more to say.

In the coming months and years, I hope to see many Sojourner Truth's atop many a stump fiery speech in progress. And we should not just be listened to. More than anything, I urge white women to look for their leadership from Black women too.

If millions of white women marched today, some of them had to have voted for Trump too. Wear a pussy hat if you like, but if we're to have any hope of gathering "these women together" to make the world right and keep it so, you'll need to keep your eyes wide open for #whitefeminism too.